On the evening of January 11th, a couple from Afton, WY pulled up to Teton Raptor Center (TRC) with an injured Common Raven that they had rescued from the intersection of Hwy 26, Pearl Street, and Flat Creek Drive in Jackson. Heading home during rush-hour traffic, Deba and Jim Ridge came across the injured raven. In trying to catch the bird, Jim and Deba followed the raven for three blocks before ultimately catching it with the help of another person. Upon admittance at TRC, it was clear that although the raven was in excellent condition otherwise, it had a broken wing. Radiographs revealed that the raven had been shot. An obvious BB was seen embedded in the fractures within the bird’s right ulna.

In 2021, Teton Raptor Center was approved to add corvids to their state and federal rehabilitation permits. Corvids, a family of birds known for their intelligence, include ravens, crows, magpies, nutcrackers and jays. Not only are corvids raptor-like in their natural history (they are omnivorous, but are known to hunt for prey including small animals, nestling birds, insects, and small reptiles) they are also common in Teton County where TRC receives dozens of calls about injured, ill, and orphaned corvids annually. Until recently, the closest rehabilitation center to care for injured corvids was Ironside Bird Rescue in Cody, WY. If TRC admitted a corvid, federal permits allowed a temporary 48 hour stay to stabilize the bird before transferring the bird to Ironside Bird Rescue, over 300 miles away. To address the need in the community, TRC expanded the species that are permitted to be rehabilitated to include corvids. The raven admitted on January 11, 2022 was TRC’s first corvid patient.

The morning after admittance to Teton Raptor Center, the raven underwent surgery at Jackson Animal Hospital to pin the fractured ulna. Because projectiles carry a lot of energy, the bone was fractured into four large pieces and several smaller pieces. The BB was near the elbow. Additionally, projectiles introduce a lot of contamination to a fracture. Though surgery was a success, the raven still has a lot to overcome. At TRC, the bird is undergoing a course of antibiotics, anti-inflammatory medication, and oxygen therapy. As the bone begins to heal, TRC will introduce laser therapy and physical therapy to keep the joints healthy and limber. Avian orthopedics are challenging since birds must have symmetrical wing extension to be able to fly normally. Though we often see ravens hopping around the ground foraging, they are known for flying vast distances, even seen circling the highest peaks in the Teton Range.

Ravens are solid black and larger than crows with a bigger, slightly curved beak. They are very common in Teton County today but were not documented in this area until 1938. Persecution through hunting, poisoning, and trapping as well as habitat loss through logging caused raven populations to decline throughout the nineteenth and twentieth centuries. However, in recent decades, ravens have recolonized much of their range, partly due to protections including the Migratory Bird Treaty Act of 1918 . This 100 year old treaty prohibits the killing, capturing, selling, trading, and transport of protected migratory bird species without authorization by the Department of Interior U.S. Fish and Wildlife Service. However, many protected birds are still illegally shot in Teton County.

“We encourage any illegal shooting of birds be reported to the Wyoming Game and Fish Department, just as we would any other wildlife violation”, said Jackson Game Warden Kyle Lash. Lash continued, “Solving wildlife crimes can be difficult and often it is these reports from concerned citizens that make the difference in bringing an individual to justice.”

Though it is illegal to shoot protected birds, they are sometimes viewed as pests, despite the fact that they provide important ecological services. Ravens for example, scavenge for carrion. As opportunists, they look for any easy source of food. Roadkill is a major food source for ravens, especially in winter. By eating carrion, they help reduce the spread of disease, support the nutrient cycle, and reduce the smell of rotting carcasses. They also help regulate the population of some insects and mice.

Over the last five years, Teton Raptor Center has rescued dozens of ravens, magpies, and crows from around Teton County, five of which, rescued in Jackson, were confirmed by radiographs to have been illegally shot. TRC has admitted over 40 raptors that have been shot from all over Wyoming and Idaho, including birds such as Bald Eagles and Peregrine Falcons, species also protected by the Migratory Bird Treaty Act, and in the case of eagles, protected by the Bald and Golden Eagle Protection Act.

“We were stunned by this bird’s rational decision-making and obvious intelligence, and were impressed by the respect shown to it by all of the motorists, and by the sincere cooperation of those we called upon for help,” said Jim and Deba Ridge, the raven’s rescuers.

Anyone with possible information regarding the illegal shooting of birds or any other wildlife violation is encouraged to call the Jackson Game and Fish office at 1-800-423-4113 or the STOP POACHING hotline at 1-877-WGFD-TIP (1-877-943-3847). 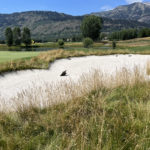 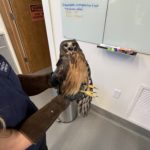 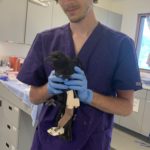 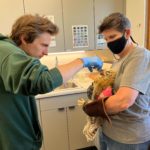 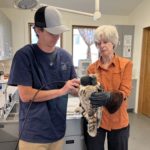