Golden Eagle 8.6.22 was admitted to TRC’s rehabilitation clinic after being found on the ground unable to fly away and in poor condition. The young eagle (roughly four-months-old) received supportive care to improve her health before eventually being introduced to the flight barn. When it became time for the young bird to begin flight conditioning, it was made obvious that her flight ability was clumsy, with many miscalculations when it came to being able to stick a landing. Although she could fly and was able to do so well above our heads, she ultimately needed more space to be able to fly at the best of her ability.

While not all bird species require time with a falconer to improve their flight and hunting abilities, certain individual birds can benefit greatly. It is generally recommended that, for Golden Eagles and Peregrine Falcons, these birds be transferred to a falconer to practice specialized flight. Golden Eagles perform several intricate and complex maneuvers in flight such as stooping, gliding, and diving that require optimal space, intensive flight conditioning, and hunting practice. Additionally, Golden Eagles rarely use the energetically-draining motion of flapping and rely heavily on geographic conditions, such as topography, thermal updrafts, and landscape, for optimal flight and altitude. Having the choice to train a bird in an outdoor environment that could harvest these harmonious conditions is a superior choice to a flight barn that is not conducive for these particular requirements. In the individual case of GOEA 8.6.22, sending this bird to a falconer was a no brainer for staff who needed to see this bird improve greatly on her ability to fly and hunt successfully. 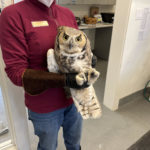 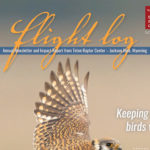 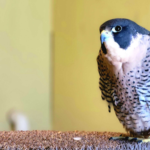 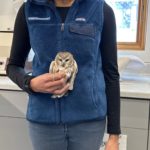 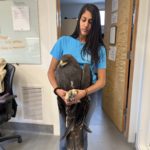